Learn how to make batteries safe with built-in protection circuits.

Batteries can release high energies and the safety requirements for nickel- and lithium-based batteries and cells for portable applications are harmonized under IEC 62133. The standard came into effect in 2012 to reduce the global risk in transporting, storing and operating batteries.

The most basic safety device in a battery is a fuse that opens on high current. Some fuses open permanently and render the battery useless; others are more forgiving and reset. Figure 1 illustrates the top of an 18650 cell for Li-ion with built-in safety features.

The resistance of the positive thermal coefficient (PTC) (blue) is low during normal operation and increases when the temperature rises above a critical level to reduce current flow. The PTC is reversible and returns to high conductivity when the temperature normalizes.

The current interrupt device (CID) is a fuse-type device that cuts off the electrical circuit permanently when triggered by excessive cell pressure, high temperature, or high voltage, depending on design. In Figure 1, the CID operates by pressure. When the internal pressure increases to about 1,000kPa, the scored top disk (orange) breaks, separates from the metallic foil (brown) and disconnects the current flow. This also allows gas to vent.

The last safety device is the vent that releases gas during an anomaly and can be resealed. However, the pressure of a disintegrating cell can be so large that the gases are unable to escape in an orderly way and venting with flame occurs. In some cases the top of the cell escapes like a bullet from a shotgun. Similar to a nuclear meltdown that cannot be stopped once in progress; a Li-ion battery once in disintegration should be allowed to burn out in a safe place with ventilation. 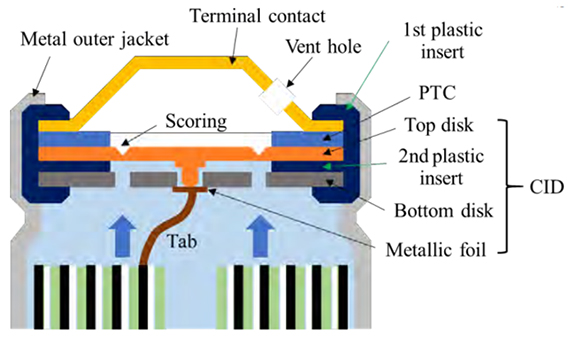 Protection devices have a residual resistance that causes a slight decrease in overall performance due to a resistive voltage drop. Not all cells have built-in protections and the responsibility for safety in its absence falls to the Battery Management System (BMS).

Further layers of safeguards can include solid-state switches in a circuit that is attached to the battery pack to measure current and voltage and disconnect the circuit if the values are too high. Protection circuits for Li-ion packs are mandatory. (See BU-304b: Making Lithium-ion Safe.)

More information on why batteries fail, what the user can do when a battery overheats and simple guidelines using Lithium-ion Batteries are described in BU-304a: Safety Concerns with Li-ion.

How to Prolong Your Lithium Polymer Batteries
Scroll to top