Within the context of a discussion about batteries, defining the term “state of charge” is simple. It’s a term that essentially refers to how “full” your battery is, at least in terms of its remaining energy. Compared to how much energy a battery can store at 100%, your current state of charge shows you how much is remaining, thus allowing you to predict when a recharge may be in order.

The larger implications of that term, however, are far less straightforward.

If you truly want to get the most out of your battery and make sure that it lasts as long as possible, there are a few key things about concepts like charge/discharge cycles, End of Life and more that you’ll definitely want to know more about.

Learn How To Expedite Your Battery Pack Design & Development 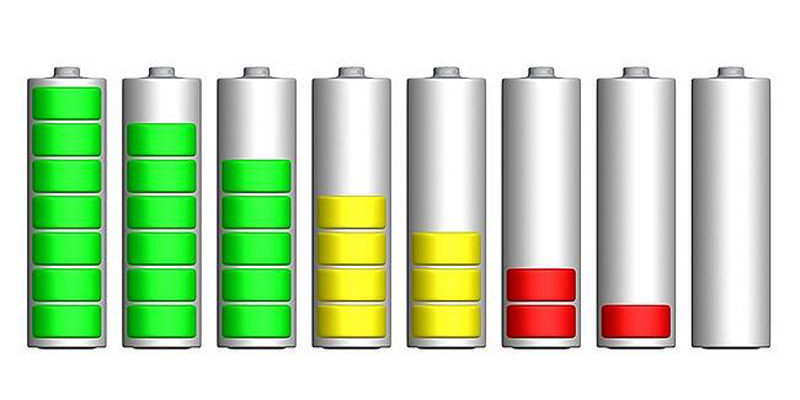 At its core, a “charge/discharge cycle” is exactly what it sounds like – a situation where the energy in a battery is discharged before subsequently being charged back up again.

It’s important to note that rarely does this ever mean taking a battery from 100% capacity to 0% and back again. Instead, most manufacturers use an 80% DoD (depth of discharge) formula for a battery’s overall rating. This means that roughly 80% of the available energy in a battery is delivered, while about 20% remains in reserve. Using this technique is an efficient way to increase a battery’s overall service life, prolonging its lifespan significantly in many applications.

The expected charge and discharge cycles for a battery depend less on the battery chemistry and more on the overall capacity of the battery itself. The only real difference has to do with when a full charge must be applied. For lead acid batteries, for example, a full charge should be applied every few weeks (or at least every few months) because a constant low charge will ultimately cause sulfation and damage the unit. With nickel-based batteries, a partial charge is totally acceptable. With lithium-ion batteries, a partial charge is actually better than a full charge because of the implications it brings with it for the long-term health of the battery.

The end of life for a battery is exactly that – the moment where the battery reaches the end of its usefulness and/or lifespan and can no longer operate at anywhere close to the peak capacity that you once enjoyed.

Generally speaking, end of life for a battery will be determined in one of three different ways depending on the product’s manufacturer.

Cycle life. This refers to the total number of times that a battery can be charged and discharged, as outlined above. Manufacturers will typically include the recommended cycle life on the product’s packaging or in other documentation available at the time of purchase.

Warrantied life. This will usually be outlined in a specific number of years, like any other product that you may have. A battery with a 10-year life under warranty is typically expected to reach true end of life by roughly that time.

Total energy throughput. This is the total amount of energy that will pass through the battery over the course of its lifespan and this will usually be measured in megawatt-hours.

Occasionally, manufacturers will reference end of life using a measurement called expected operational life. If this is present, it will usually be somewhat longer than the “warrantied life” measurement. At that point, your battery will no longer be covered under any type of manufacturer’s warranty, but it will still continue to function until about the time that the listed number of years have passed.

It’s important to note, however, that end of life does not mean that your battery will suddenly become useless after a certain amount of time has passed. Far from it. It simply describes the total amount of time that you can expect your battery to operate at peak performance.

For the sake of example, consider the battery in your smartphone, tablet, or other type of mobile device. When you charge your phone for the first time after buying it, 100% may get you approximately 10 hours of use before you must charge the battery back up again. Over time, that number will slowly decrease. You may notice that you only get nine hours out of 100% capacity, or eight-and-a-half, even though your general use and operational conditions haven’t changed.

Once that battery reaches true end of life, that number is going to start to rapidly drop. This is because 100% no longer represents the same amount of stored energy that it once did. You’ll still be able to use your battery, but there will come a day where it won’t be able to hold a charge at all, at which point it will likely have to be totally replaced.

Best Practices For Prolonging The Life Of Your Battery

Consumers can absolutely manage their batteries differently to obtain more life cycles from a battery. They just need to remember to follow a few key best practices over time.

For starters, you should always keep your battery at a moderate temperature whenever possible. Instances of extreme heat or extreme cold can cause the battery to expand or contract, both of which will cause long-term issues and could ultimately lead to problems like corrosion.

Along the same lines, always store your batteries in a cool place whenever you’re not using them. If you’re going to be storing a battery for an indefinite period, don’t allow its charge to deplete to zero. Instead, store your battery with a charge of about 50% for the best long-term results.

For certain types of batteries like lithium-ion, you should also avoid deep cycling; don’t let your battery drain down to 0% before you charge it back up again. Experts at Battery University agree that lithium-ion batteries tend to last the longest when they are operating between 30% and 80% charge as often as possible.

Finally, you should also do whatever you can to avoid abusing your battery over time. Batteries will always experience additional stress via harsh discharges and rapid charges. If you’re going to be using a battery with a particular application, make sure that the battery is optimized for the power and energy requirements you’re working with. If necessary, increase the size of your battery to combat this type of unnecessary stress.

When a lithium-ion battery in particular reaches its natural end of life, you should also make sure that you dispose of it properly. You can’t just throw them in the garbage. They are technically considered to be hazardous waste in this state. Instead, contact your local landfill to find a battery recycling drop-off location in your area.