The hybrid car is not new – Ferdinand Porsche designed the series-hybrid vehicle in 1898. Called the Lohner-Porsche carriage, the hybrid function served as an electrical transmission rather than power boost. With Mr. Porsche in the driver’s seat, the car broke several Austrian speed records, including the Exelberg Rally in 1901. Another example of an early hybrid was the 1915 Woods Motor Vehicle built in Chicago. The car used a four-cylinder internal combustion engine and an electric motor. Below 15 mph (25 km/h), the electric motor propelled the vehicle; at higher speeds, the gasoline engine kicked in to take the vehicle up to a top speed of 35 mph (55 km/h). As part of the Federal Clean Car Incentive Program, Victor Wouk installed a hybrid drive train in a 1972 GM Buick Skylark but the EPA canceled the program in 1976. Meanwhile, Honda and Toyota have made strong headways by commercializing attractive and fuel-efficient hybrid cars.

The hybrid electric vehicle (HEV) conserves fuel by using an electric motor that assists the internal-combustion engine (IC) on acceleration and harnesses kinetic energy during breaking. Furthermore, the IC motor turns off at stops and during slow travel. When full power is required, both the IC engine and the electric motors engage simultaneously to get maximum boost. This power-sharing scheme offers two advantages; it calls for a smaller IC engine and improves acceleration because the electric motor has excellent torque characteristics.

Most HEVs use a mechanical drive train from the IC engine to the wheels. In this respect, the HEV is similar to an ordinary vehicle with crankshaft, clutch and transmission, with the difference of having an electric motor and a battery. This design is known as a parallel configuration. Most up-and-coming plug-in HEVs use the serial configuration in which the wheels are powered by one or several electric motors. Instead of a mechanical link, the IC engine energizes a generator to produce electricity for the motor(s). Similar to a laptop or a cell phone, the driver plugs the car into the AC outlet for an overnight charge. The typical driving range with a full charge is 20 miles or 32 km. On long trips, the IC engine engages to provide continuous power for the electric motors.

What’s the best battery for the hybrid car?

The early HEV models used lead acid batteries because there was no alternative. Today, Honda and Toyota employ nickel-metal-hydride (NiMH). This chemistry is lighter and environmentally friendlier than lead-based systems. The battery consists of cylindrical cells that are connected in series to attain several hundred volts. The cell strings are suspended in mid air to allow air-cooling. Figure 1 shows a demonstration pack of an early Toyota hybrid car battery. 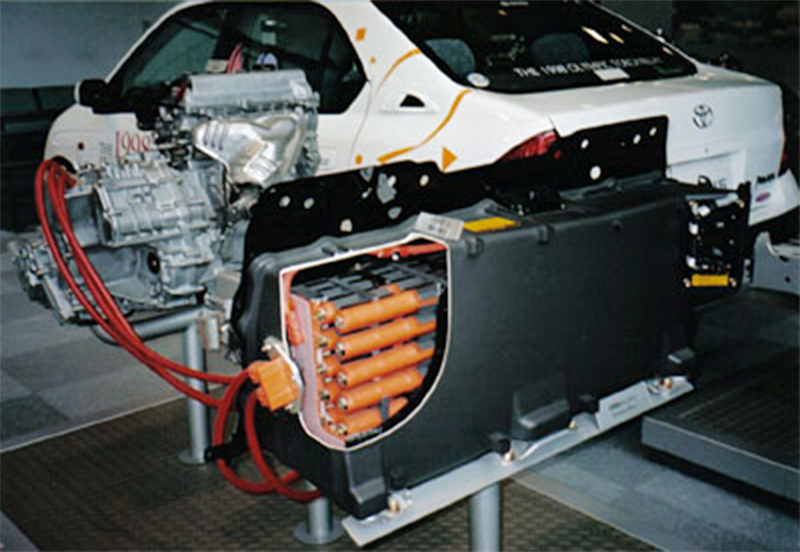 The cells (orange color) are supported to allow forced air-cooling. The battery is placed behind the back seat.

One of the critical battery requirements for hybrid applications is longevity. Rechargeable batteries for consumer products typically last for two to three years. This short service life is no major drawback with cell phones, laptops and digital cameras because the devices get obsolete quickly. At $2,000 to $3,000 per battery pack, the replacement cost of an HEV battery would constitute a major expense.

Most batteries for HEV are guaranteed for eight years. To meet this long service life, the cells are optimized for longevity and not size and weight, as is the case with portable applications. Since the battery runs on wheels, the increased weight and size is not too critical.

A NiMH for an HEV can be charged and discharged 1,000 times if done at an 80% depth-of-discharge. In a hybrid vehicle, a full discharge occurs seldom except if the owner lives on a mountain and requires all available battery power to commute home. Such a routine would add stress to the battery and the life would be shortened. In most other application, the hybrid car only uses 10% of the rated battery capacity. This allows thousands of charge/discharge cycles. Batteries in satellites use a similar system in which the battery discharges less than 10% during a satellite night. NASA achieves this by over-sizing the battery.

One of the limitations of NiMH is moderate energy conversion efficiency. This translates to the battery getting hot on charge and discharge. The charge efficiency is best at 50-70% state-of-charge. Above 70% the battery cannot absorb the charge well and much of the charging energy is lost in heat. Operating a battery with a partial charge requires a larger mass that lowers the energy-to-weight ratio and efficiency.

The Japanese car manufacturers have tried several battery chemistries, including going back to lead acid. Today, the focus is on lithium-ion. The cobalt-based lithium-ion is one of the first chemistries in the lithium family and offers a very high energy density. Unfortunately, this battery system cannot deliver high currents and is restricted to portable applications.

HEV manufacturers are experimenting with manganese (spinel) and phosphate versions. These lithium-ion systems offer an extremely low internal resistance, deliver high load currents and accept rapid charge. Unlike the cobalt version, the resistance stays low throughout the life of the battery. To verify the characteristic of manganese-based lithium-ion, a research lab applied 30,000 discharge/charge cycles over a period of seven years. Although the capacity dropped from 100% to 20%, the cell retained its low internal resistance. The drawback of manganese and phosphate is lower energy density but these systems provide 20% more capacity per weight than NiMH and three times more than lead acid. Figure 2 illustrates the energy densities of the lead, nickel and lithium-ion systems. It should be noted that lithium-ion systems have the potential of higher energy densities but at the cost of lower safety and reduced cycle life. 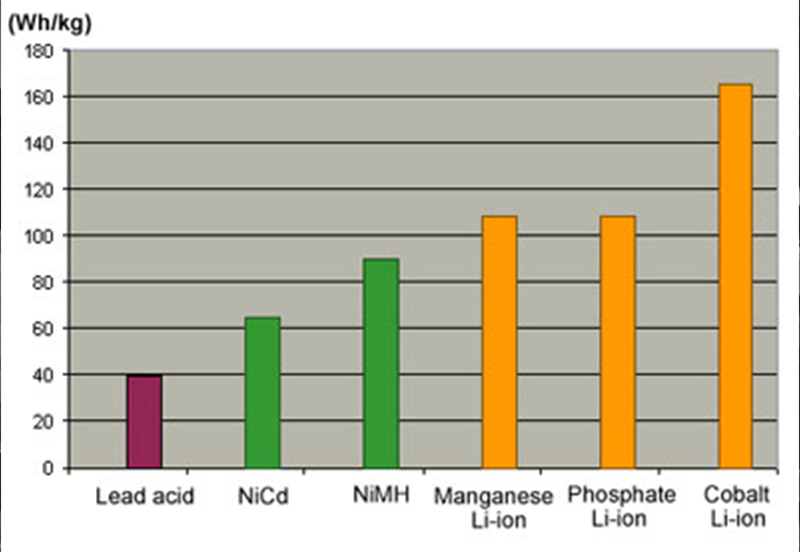 The Lithium-ion systems are promising candidates for both the HEV and plug-in HEV but require more research. Here are some of the roadblocks that need to be removed:

Durability: The buyer requests a warranty of ten years and more. Currently, the battery manufacturer for hybrid electric vehicles can only give eight years on NiMH. The longevity of lithium-ion has not yet been proven and honoring eight years will be a challenge.

Cost: If the $2,000 to $3,000 replacement cost of a nickel-metal-hydride pack is prohibitive, lithium-ion will be higher. These systems are more expensive to produce than most other chemistries but have the potential for price reductions through improved manufacturing methods. NiMH has reached the low cost plateau and cannot be reduced further because of high nickel prices.

Safety: Manganese and phosphate-based lithium-ion batteries are inherently safer than cobalt. Cobalt gets thermally unstable at a moderate temperature of 150°C (300°F). Manganese and phosphate cells can reach 250°C (480°F) before becoming unsafe. In spite of the increased thermal stability, the battery requires expensive protection circuits to supervise the cell voltages and limit the current in fail conditions. The safety circuit will also need to compensate for cell mismatch that occurs naturally with age. The recent reliability problems with lithium-ion batteries in portable devices may delay entry into the HEV market.

Availability: Manufacturers of manganese and phosphate cells can hardly keep up with the demand. A rapid increase of lithium for HEV batteries would put a squeeze on battery production. With 7 kg (15 lb) of lithium per battery, there is talk of raw material shortages. Most of the known supplies of lithium are in South America, Argentina, Chile and Bolivia.

Imagine a plug-in electric vehicle that can go 20 miles (32 km) with a single charge from the electrical outlet at home. There is no pollution and the neighbors won’t hear you coming and going because the vehicle is totally silent. With the absence of gas tax, the road system is yours to use for free. Or is it?

As good as this may sound, the savings will be small or non-existent because of the battery. Dr. Menahem Anderman, a leading expert on advanced automobile batteries, says that we still have no suitable battery for the plug-in HEV and that the reliability of lithium-ion technology for automotive applications has not yet been proven. Unlike the ordinary HEV that operates on shallow charges and discharges, the plug-in HEV is in charge depletion mode that requires deep discharges. To obtain an acceptable driving range, the PHEV battery will need to be five times larger than the HEV battery. With an estimated life span of 1000 full charge and discharge cycles, the battery would need to be replaced every three years. At an estimated $10,000 per battery replacement, the anticipated cost savings would be quickly exhausted.

Modern cars do more than provide transportation; they also include auxiliary devices for safety, comfort and pleasure. The most basic of these auxiliaries are the headlights and windshield wipers. Most buyers would also want heating and air-conditioning systems. These amenities are taken for granted in gasoline-powered vehicles and will need to be used sparingly in a PHEV.

Analysts give another 10 years before a viable plug-in HEV will be available. The promise of a clean-burning fuel cell car is still vivid in our memory. Analysts now estimate 20 years before the fuel cell is ready for mass-produced cars. There are rumors that the fuel cell may never make it into an ordinary car. If this is true, a dream will go down in history with the steam-powered airplane of the mid 1800s that was simply too cumbersome to fly.

The paradox of the hybrid vehicle

At the Advanced Automotive Battery Conference in Hawaii, a delegate member challenged a maker of HEVs with the claim that a German diesel car can get better fuel economy than the hybrid. The presiding speaker, being a trained salesman, flatly denied this notion. There is some truth to his claim, however. On the highway, the diesel car is indeed more fuel-efficient but the HEV has the advantage in city driving. Power boost for fast acceleration and regenerative breaking are advantages that the German diesel does not offer.

Someone then asked, “What would happen if the HEV depletes its batteries while driving up a long mountain pass? Will the car have enough power?” The answer was that the car would make it with the IC engine alone but the maneuverability would be restraint. To compensate for this eventuality, some HEV manufacturers offer SUVs featuring a full-sized IC motor of 250 hp and an electrical motor at 150 hp; 400 hp in total. Such a vehicle would surly find buyers, especially if the government provides grant money for being ‘green.’ It’s unfortunate that the buyers of a small car or the commuters taking public transport won’t qualify for such a handout.

We anticipate that lithium-ion will eventually replace nickel-metal-hydride in hybrid electric vehicles but short service life, high manufacturing costs and safety issues will stand in its way today. We need to remind ourselves that the automotive market can only tolerate a marginal cost increase for a new battery technology. In terms of added capacity, lithium-ion offers only a 20% increase in energy density per weight over nickel-based systems. The nickel-metal-hydride has proven to work well in current HEVs and a new chemistry would need to offer definite advantages over present systems to find buyers.

Toyota, Honda and Ford are leading in HEV technology. Other major automakers are expected to offer competitive models by 2010. Currently, Panasonic EV Energy and Sanyo supply over 90% of the HEV batteries. Both companies are also developing lithium-ion batteries.
While Japan and Korea are focusing on manganese systems, the USA is experimenting with phosphate, the chemistry that made the A123 Systems famous. Europe is relying on clean-burning diesel. These engines are so clean that they won’t even stain a tissue that is placed on the exhaust pipe. BMW is working on a zero emission hydrogen car.

Time will tell who will be the winner in the race for cleaner, more fuel-savvy vehicles and longer-living cars. In terms of longevity, the diesel would be the winner today. We hope that future batteries will one-day have the endurance to match or exceed the robust diesel engine.

Why There Are Still Some Lithium-ion Batteries That Explode Up to Today?
Scroll to top