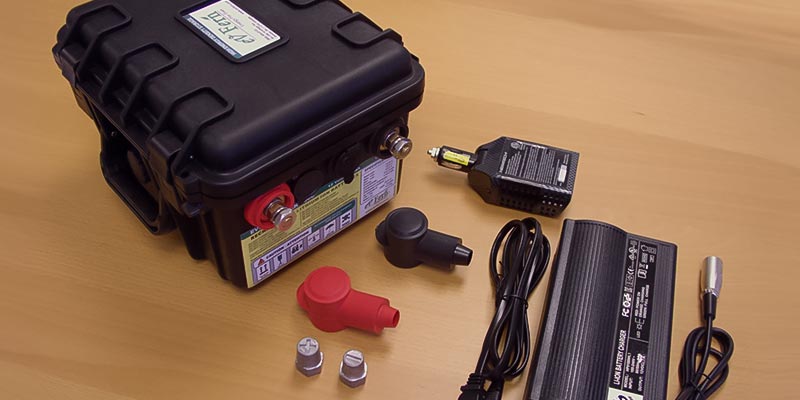 Lithium iron phosphate batteries pack a lot of power and value into a small package. The chemistry of these batteries is a big part of their superior performance. But all reputable commercial lithium-ion batteries also include another important element along with the battery cells themselves: a carefully designed electronic battery management system (BMS). A well-designed battery management system protects, and monitors a lithium-ion battery to optimize performance, maximize lifetime, and ensure safe operation over a wide range of conditions.

1. Over and Under Voltage

Lithium iron phosphate cells operate safely over a range of voltages, typically from 2.0V to 4.2V. Some lithium chemistries result in cells that are highly sensitive to overvoltage, but LiFePO4 cells are more tolerant. Still, significant overvoltage for a prolonged period during charging can cause plating of metallic lithium on the battery’s anode which permanently degrades performance. Also, the cathode material may oxidize, become less stable, and produce carbon dioxide which may lead to a buildup of pressure in the cell. All RELiON battery management systems limit each cell and the battery itself to a maximum voltage. The BMS in the LiFePO4 battery, for example, protects each cell in the battery and limits the voltage in the battery to 15.6V.

Undervoltage during battery discharge is also a concern since discharging a LiFePO4 cell below approximately 2.0V may result in a breakdown of the electrode materials. Lithium batteries have a recommended minimum operational voltage. In the Himax 12.8V 100Ah, for example, the minimum recommended voltage is 11V. The BMS acts as a failsafe to disconnect the battery from the circuit if any cell drops below 2.0V.

Every battery has a maximum specified current for safe operation. If a load is applied to the battery which draws a higher current, it can result in overheating the battery. While it’s important to use the battery in a way to keep the current draw below the maximum specification, the BMS again acts as a backstop against overcurrent conditions and disconnects the battery from operation.

Unlike lead-acid or lithium cobalt oxide batteries, lithium iron phosphate batteries operate efficiently and safely at temperatures up to 60oC or more. But at higher operating and storage temperatures, as with all batteries, the electrode materials will begin to degrade. The BMS of a lithium battery uses embedded thermistors to actively monitor the temperature during operation, and it will disconnect the battery from the circuit at a specified temperature. In the example of the RELiON RB100, the BMS disconnects the battery at 80oC (176oF) and reconnects the battery at 50oC (122oF).

Lithium-ion batteries have a major difference from lead-acid batteries when it comes to balancing the voltage in each individual cell during charging. Because of small differences in manufacturing or operating conditions, each cell in a battery charges at a slightly different rate. In a lead-acid battery, if one cell charges faster and reaches its full voltage, the typical low end of charge current, along with the excess charge-return, will ensure the other cells get fully charged. In a sense, the cells in a lead-acid battery are self-equalizing during charge.

This is not the case with lithium-ion batteries. When a lithium-ion cell is fully charged, its voltage begins to rise further which may lead to electrode damage. If the charge of the entire battery is stopped when only one cell is fully charged, the remaining cells do not reach full charge and the battery will operate below peak capacity. A well-designed BMS will ensure each cell safely and fully charges before the entire charging process is complete.

Which battery is better polymer or lithium?
Scroll to top