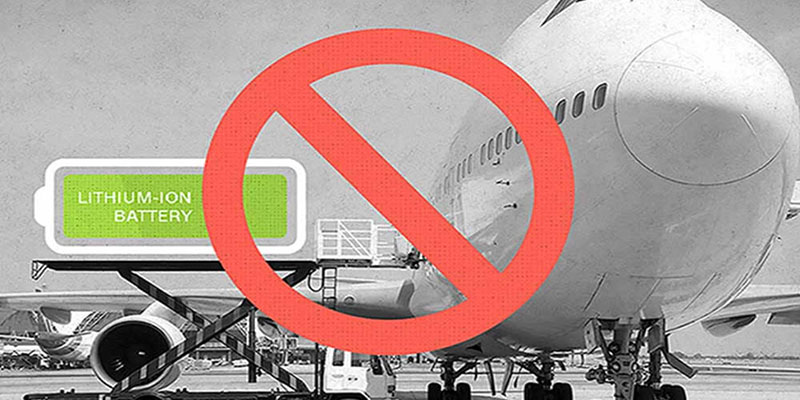 You must be traveling so soon, and most probably, that’s why you have landed into this great piece of information. Do you know what is involved when traveling with devices containing lithium batteries? I bet not! That’s why you are on this.

Well, there are restrictions when we talk about traveling on planes. One of those restrictions involves lithium batteries. They may seem small, but the impact they can have when they cause a fire on board is unimaginable. Lithium batteries can produce dangerous heat levels, cause ignition, short circuit very easy, and cause inextinguishable fires. That’s why renowned aviation authorities, including those in the USA, have banned lithium batteries when traveling.

What Batteries are Not Allowed on Airplanes?

How Can Lithium Batteries Prevent you From Flying?

It would be good to let you know the limitation that air passengers are set to observe as they go with devices using lithium batteries or when traveling with spare batteries.

Here are some guidelines:

For the lithium-ion batteries, they should indicate an hour watt rating of less than 100 Wh.

I know you wonder how about that battery of yours with no Wh rating, you have to calculate it using the formula below to determine the watts hours rating.

If your battery’s capacity is shown in milliamp here hours, you will need to divide the ampere-hours by 1000 before executing the math.

How Do You Travel With Lithium Batteries?

Traveling with lithium battery devices can pose such a big challenge on board. They are avoided on planes following the dangers associated with them in case they cause a fire. However, there those that are entirely not allowed while others are allowed. If you have to travel with them, you either have them on the carry on or at checked luggage. Aviation authorities have gone ahead to ban them. For those that are allowed, they should be limited to keep the minimal chances of fire occurrence. Authorities are forced to do this despite planes having extinguisher systems because; a fire caused by lithium-ion batteries is so enormous such that the system has proven not to put it out. Mind your devices with lithium-ion batteries when on planes.