The SEI (solid electrolyte interphase) is formed on the surface of the anode from the electrochemical reduction of the electrolyte and plays a crucial role in the long-term cyclability of a lithium-based battery. 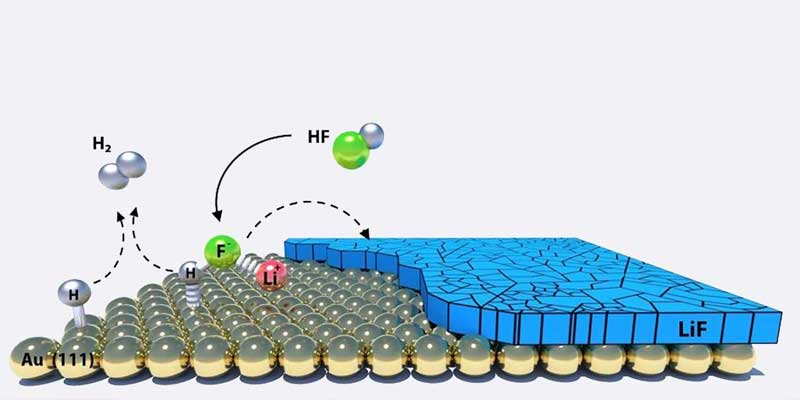 During the first charge and discharge of a lithium-ion battery, the electrode material reacts with the electrolyte at the solid-liquid phase interface. After the reaction, a thin film forms on the surface of the electrode material, where Li+ can be embedded and removed freely while electrons cannot. The SEI is about 100-120 nm thick, and it is mainly composed of various inorganic components, such as Lithium Carbonate (Li2CO3), Lithium Fluoride (LiF), Lithium Oxide (Li2O), Lithium Hydroxide (LiOH), as well as some organic components like  Lithium Alkyl Carbonates (ROCO2Li).

When a lithium-ion battery starts to charge and discharge, the lithium ions are extracted from the active material of the positive electrode. At which point, they enter the electrolyte, penetrate the separator, enter the electrolyte, and finally embed themselves into the layered gap of the negative carbon material.

Electrons then come out of the positive electrode along the outer end loop and enter the negative electrode carbon material. At this point, an oxidation-reduction reaction occurs between the electrons, the solvent in the electrolyte, and the lithium ions. As the thickness of the SEI increases to the point where electrons cannot penetrate it, a passivation layer is formed, which inhibits the continuation of the redox reaction.

On the other hand, the SEI is insoluble in organic solvents and can exist in stable conditions in organic electrolyte solutions. Furthermore,  solvent molecules cannot pass through it, thus effectively preventing the co-embedding of the ions and avoiding damage to the electrode material. This greatly improves the cycling performance and service life of the battery.

The formation of the SEI is mainly influenced by the following aspects. First, electrolytes (Li salts, solvents, admixtures, etc.), with different compositions will result in different SEI compositions and affect the stability. Next, the formation, that is, the intensity of the first charge and discharges current. High temperature will also reduce the stability of the SEI and affect the battery cycle life. In addition, the thickness of the SEI changes based on the type of negative electrode material.

In-depth research on the SEI with its formation mechanism, structure and stability, and further search for effective ways to improve the performance have been hot topics of research in the electrochemical community.

What Is High Voltage Battery?
Scroll to top