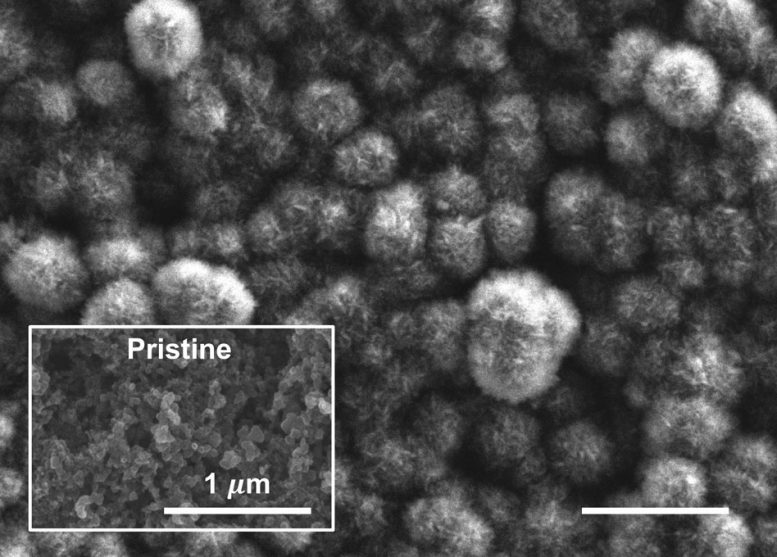 This scanning electron microscope image shows the carbon cathode of a carbon-dioxide-based battery made by MIT researchers, after the battery was discharged. It shows the buildup of carbon compounds on the surface, composed of carbonate material that could be derived from power plant emissions, compared to the original pristine surface (inset). Courtesy of the researchers

New lithium-based battery could make use of greenhouse gas before it ever gets into the atmosphere.

While still based on early-stage research and far from commercial deployment, the new battery formulation could open up new avenues for tailoring electrochemical carbon dioxide conversion reactions, which may ultimately help reduce the emission of the greenhouse gas to the atmosphere.

The battery is made from lithium metal, carbon, and an electrolyte that the researchers designed. The findings are described today in the journal Joule, in a paper by assistant professor of mechanical engineering Betar Gallant, doctoral student Aliza Khurram, and postdoc Mingfu He.

Currently, power plants equipped with carbon capture systems generally use up to 30 percent of the electricity they generate just to power the capture, release, and storage of carbon dioxide. Anything that can reduce the cost of that capture process, or that can result in an end product that has value, could significantly change the economics of such systems, the researchers say.

However, “carbon dioxide is not very reactive,” Gallant explains, so “trying to find new reaction pathways is important.” Generally, the only way to get carbon dioxide to exhibit significant activity under electrochemical conditions is with large energy inputs in the form of high voltages, which can be an expensive and inefficient process. Ideally, the gas would undergo reactions that produce something worthwhile, such as a useful chemical or a fuel. However, efforts at electrochemical conversion, usually conducted in water, remain hindered by high energy inputs and poor selectivity of the chemicals produced.

Gallant and her co-workers, whose expertise has to do with nonaqueous (not water-based) electrochemical reactions such as those that underlie lithium-based batteries, looked into whether carbon-dioxide-capture chemistry could be put to use to make carbon-dioxide-loaded electrolytes — one of the three essential parts of a battery — where the captured gas could then be used during the discharge of the battery to provide a power output.

This approach is different from releasing the carbon dioxide back to the gas phase for long-term storage, as is now used in carbon capture and sequestration, or CCS. That field generally looks at ways of capturing carbon dioxide from a power plant through a chemical absorption process and then either storing it in underground formations or chemically altering it into a fuel or a chemical feedstock.

Instead, this team developed a new approach that could potentially be used right in the power plant waste stream to make material for one of the main components of a battery.

While interest has grown recently in the development of lithium-carbon-dioxide batteries, which use the gas as a reactant during discharge, the low reactivity of carbon dioxide has typically required the use of metal catalysts. Not only are these expensive, but their function remains poorly understood, and reactions are difficult to control.

“What we’ve shown for the first time is that this technique activates the carbon dioxide for more facile electrochemistry,” Gallant says. “These two chemistries — aqueous amines and nonaqueous battery electrolytes — are not normally used together, but we found that their combination imparts new and interesting behaviors that can increase the discharge voltage and allow for sustained conversion of carbon dioxide.”

They showed through a series of experiments that this approach does work, and can produce a lithium-carbon dioxide battery with voltage and capacity that are competitive with that of state-of-the-art lithium-gas batteries. Moreover, the amine acts as a molecular promoter that is not consumed in the reaction.

The key was developing the right electrolyte system, Khurram explains. In this initial proof-of-concept study, they decided to use a nonaqueous electrolyte because it would limit the available reaction pathways and therefore make it easier to characterize the reaction and determine its viability. The amine material they chose is currently used for CCS applications, but had not previously been applied to batteries.

This early system has not yet been optimized and will require further development, the researchers say. For one thing, the cycle life of the battery is limited to 10 charge-discharge cycles, so more research is needed to improve rechargeability and prevent degradation of the cell components. “Lithium-carbon dioxide batteries are years away” as a viable product, Gallant says, as this research covers just one of several needed advances to make them practical.

But the concept offers great potential, according to Gallant. Carbon capture is widely considered essential to meeting worldwide goals for reducing greenhouse gas emissions, but there are not yet proven, long-term ways of disposing of or using all the resulting carbon dioxide. Underground geological disposal is still the leading contender, but this approach remains somewhat unproven and may be limited in how much it can accommodate. It also requires extra energy for drilling and pumping.

The researchers are also investigating the possibility of developing a continuous-operation version of the process, which would use a steady stream of carbon dioxide under pressure with the amine material, rather than a preloaded supply the material, thus allowing it to deliver a steady power output as long as the battery is supplied with carbon dioxide. Ultimately, they hope to make this into an integrated system that will carry out both the capture of carbon dioxide from a power plant’s emissions stream, and its conversion into an electrochemical material that could then be used in batteries. “It’s one way to sequester it as a useful product,” Gallant says.

“It was interesting that Gallant and co-workers cleverly combined the prior knowledge from two different areas, metal-gas battery electrochemistry and carbon-dioxide capture chemistry, and succeeded in increasing both the energy density of the battery and the efficiency of the carbon-dioxide capture,” says Kisuk Kang, a professor at Seoul National University in South Korea, who was not associated with this research.

“Even though more precise understanding of the product formation from carbon dioxide may be needed in the future, this kind of interdisciplinary approach is very exciting and often offers unexpected results, as the authors elegantly demonstrated here,” Kang adds.

MIT’s Department of Mechanical Engineering provided support for the project.

Do hybrid cars cause pollution？
Scroll to top