Governments are asking the public to reduce fuel consumption and lower pollution. They do this without imposing a change in driving habits and the HEV fits the bill. Japan is leading in adapting the HEV because of high fuel costs and environmental concerns.

The purpose of the HEV is to conserve fuel without sacrificing performance, and the HEV achieves this by using one or several electric motor to assist the ICE during acceleration and to harness kinetic energy when braking. The ICE turns off at traffic lights and the electric motor propels the car through slow-moving traffic. On full power, both the ICE and electric motor engage for optimal acceleration.

The HEV uses a mechanical powertrain to transfer power from the ICE to the wheels. In this respect, the HEV resembles an ordinary vehicle with a crankshaft and a clutch, also known as parallel configuration. Fuel savings are achieved by the use of a smaller ICE that is tuned for maximum fuel efficiency rather than high torque. Toyota claims a thermal efficiency of 40 percent for the new Prius. Peppy driving is accredited to the electric motor as this propulsion system delivers far better torque than a sluggish ICE of the same horsepower. Figure 1 illustrates the different modes of an electrified powertrain in in an HEV. 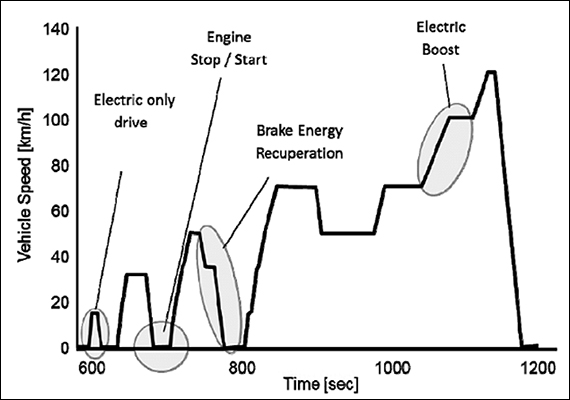 Figure 1: Basic function or an electrified powertrain in an HEV.
Battery power is only used for short durations. The HEV battery seldom encounters full charge-discharge cycles that are common in the electric vehicle.
Source: RWTH Aachen University, Germany

Most batteries for HEVs are guaranteed for 8 years. To meet this long service life, the cells are optimized for longevity rather than high specific energy as with consumer products. The battery maker achieves this in part by using a thicker and more durable separator. To reduce stress, the battery operates at 30–80 percent state-of-charge (SoC), or roughly 3.5–4.0V/cell for Li-ion, rather than the customary 3.0–4.20V/cell.

HEV batteries operate momentarily and share similarity with a starter battery by applying short power bursts for acceleration rather than long, continuous discharges as with the EV. Rarely will an HEV battery discharge to a low 20 percent state-of-charge (SoC). Under normal use, a parallel HEV consumes less than 2 percent of the available battery capacity per mile (1.6km). Capacity fade goes unnoticed, and an HEV battery still works well with less than half the original capacity.

Figure 2 shows the battery capacity of six hybrid cars at a 256,000km (160,000 miles). The test was done by the US Department of Energy’s FreedomCAR and Vehicle Technologies Program (FCVT) in 2006 according to SAE J1634 practices and it included the Honda Civic, Honda Insight and Toyota Prius. 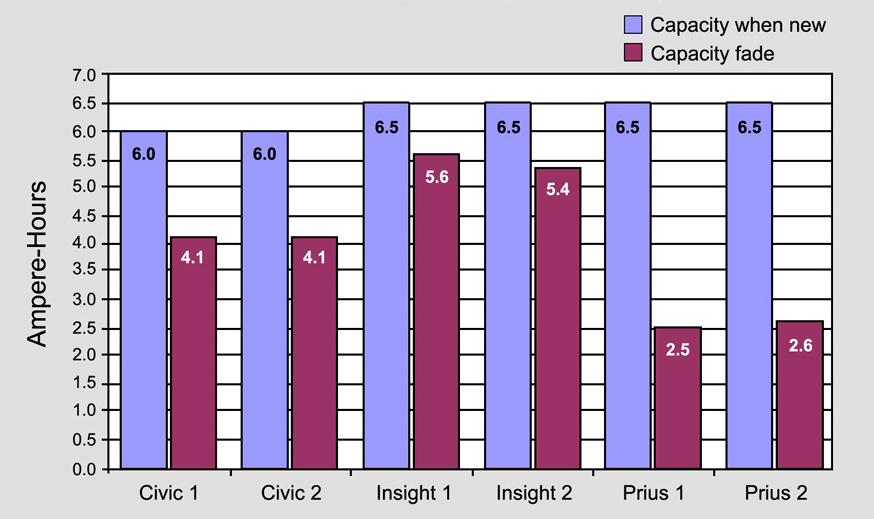 Figure 2: End-of-life battery capacity of HEVs. At 256,000km (160,000 miles), the two Honda Civic vehicles had 68% capacity, the Insight had 85% and the Prius had 39%. The capacity fade did not affect the fuel efficiency by much.
Source: FreedomCAR and Vehicle Technologies Program

The hybrid battery of the two Honda Civic vehicles had 68 percent remaining capacity; the Insight had 85 percent and the Prius 39 percent. Even with lower capacity at the end of life, the fuel efficiency was not severely affected. The Insight showed a 1.2mpg (0.12L/km) decrease in fuel economy during the test, while the Prius reduced the fuel efficiency by 3.2mpg (0.33L/km). Air-conditioning was off in both cases.

Stringent battery demands are needed for hybrid trucks with a gross vehicle weight of 33 tons (73,000 lb). The battery must be able to continuously charge and discharge at 4C, deliver 10kW (200hp) for up to 10 minutes, operate at –20°C to 40°C (–4°F to 104°F) and deliver 5 years of service. Supercapacitors would provide the required durability but high cost and low energy density are against this choice. Lead acid has good discharge characteristics but it is slow to charge. Li-ion, especially LTO, would be a good choice but high power draw requires active cooling. Second generation NiMH is being tested; the rugged NiCd may also be tried.

Paradox of the hybrid vehicle

As good as a hybrid may be, the car is not without ironies. At a conference addressing advanced automotive batteries, an HEV opponent argued with an HEV maker that a diesel car offers better fuel economy than a hybrid. Being a good salesman, the HEV maker flatly denied the claim. Perhaps both are right. In city driving, the HEV clearly delivers better fuel-efficiency while diesel consumes less on the highway. Combining both would provide the best solution, but the high cost of a diesel-hybrid solution might not pay back with low fuel prices, although such vehicles are available in Europe.

High-end HEVs come with a full-sized ICE of 250hp and an electrical motor of 150–400hp in total. Such vehicles will surely find buyers, especially if the government assists with grants for being “green.” It’s unfortunate that consumers who walk, cycle or take public transportation won’t get such handouts. Common sense reminds us to conserve energy by driving less, or using smaller vehicles when driving is necessary.

Wolfgang Hatz, the then head of powertrain for Volkswagen Group, said that hybrid technology is a very expensive way to save a small amount of fuel and states that Volkswagen only makes hybrids because of political pressure. He supports diesel as the most energy-efficient motor, especially on highways.

Volkswagen may have a solution — the 1-Liter Car (Figure 3). It is called the 1-Liter Car because the concept vehicle burns only one liter of fuel per 100km. To prove the concept, the then VW chairman Dr. Ferdinand Piëch drove the car from their headquarters in Wolfsburg to Hamburg for a shareholders meeting. The average consumption was just 0.89 liters per 100km (317mpg). 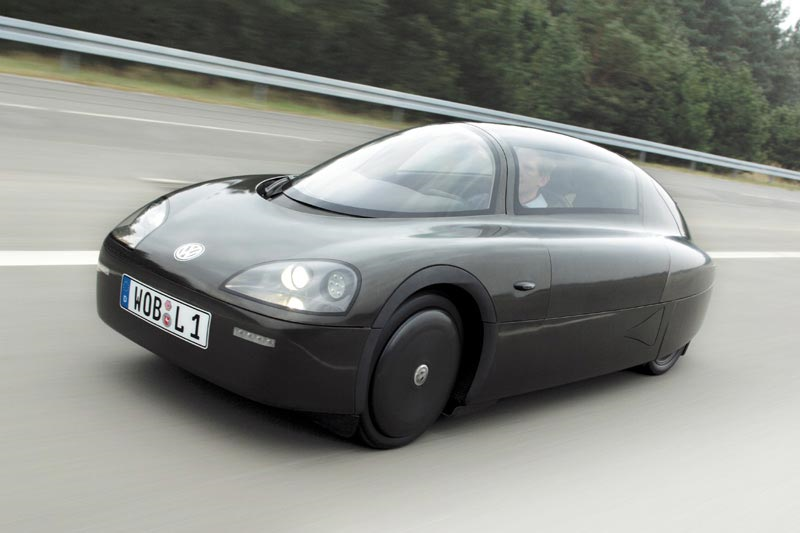 Although the 1-Liter Car did not go into production, VW demonstrated that fossil fuel could be stretched should the cost rise or should frivolous consumption create unsustainably high pollution levels. Point-to-point personal transportation could be made possible with a light carrier that weighs only 290kg, a weight that is less than the 540kg Tesla S battery. Rather than consuming 150–250Wh per kilometer, as with an electric vehicle, the 1-Liter Car would only use about 40Wh/km. Even though it burns fossil fuel, the environmental impact would be less than an EV propelled with electricity, which is mainly produced by fossil fuel.

Most PHEVs use a fully electrified powertrain in a series configuration with no mechanical linkage from ICE to wheels. The system runs solely on the electric motor for propulsion, and the ICE only engages when the batteries get low to supply electricity for the electric motor and to charge the battery. The driving range of a fully charged battery is about 50km (30 miles).

The PHEV is ideal for commuting and doing errands. No gasoline is consumed when driving on batteries and the highways are tax-free. However, there will be an increase in the electrical utility bill to charge the batteries at home.

Unlike the parallel HEV that relies on the battery for only brief moments, the PHEV battery is in charge depletion mode, meaning that the battery must work harder than on an HEV. This adds to battery stress and reduces longevity. While a capacity drop to 39 percent will affect the performance of the Toyota Prius HEV only marginally, such a loss would reduce the electric driving range of a PHEV from 50km to 20km (30 to 12 miles).

The Chevy Volt carries a 16kWh Li-ion battery that weighs 181kg (400 lb) and powers a 149hp (111kW) electric motor. The temperature of the prismatic cells is kept at 20–25C (68–77F) during charging and driving. An 115VAC outlet fills the battery in 8 hours; a 230VAC reduces the charging time to 3 hours. The driving range is 64km (40 miles) before the 1.4-liter four-cylinder ICE kicks in to activate the 53kW AC generator that powers the electric motors.

As good as the PHEV sounds, the long-term savings may be smaller than expected, especially if a battery replacement is needed during the life of the car. Battery aging is an issue that car makers avoid mentioning in fear of turning buyers away. A motorist used to driving ICE cars expects ample power at hot and cold temperatures and minimal performance degradation with age. The battery cannot match this fully, and the owner will need to tolerate a decrease in driving range during the winter, as well as accept a small reduction in delivered mileage with each advancing year due to battery aging.

Modern cars do more than provide transportation; they also include amenities for safety, comfort and pleasure. The most basic of these are the headlights and windshield wipers. Buyers also want cabin heat and air-conditioning, services that are taken for granted in a vehicle that burns fossil fuel. Heat is a by-product in the ICE that must be generated with battery power in a PHEV, but the larger concern is air-conditioning, which draws 3–5kW of power. Comforts might need to be provided more sparingly when running on a battery.

Many PHEV buyers value the environmental benefit and the pleasure of driving a quiet vehicle powered by electricity. This has a large buyer appeal because electric propulsion is more natural than that of an ICE. Drivers must adapt to the new lifestyle of charging the vehicle at night when electricity is cheap and then driving measured distances. Users of these cars will also appreciate new charging stations at workplaces and shopping malls.

Batteries in Industries
Scroll to top