Understanding the importance of low conductivity

Capacity alone is of limited use if the pack cannot deliver the stored energy effectively; a battery also needs low internal resistance. Measured in milliohms (mΩ), resistance is the gatekeeper of the battery; the lower the resistance, the less restriction the pack encounters. This is especially important in heavy loads such as power tools and electric powertrains. High resistance causes the battery to heat up and the voltage to drop under load, triggering an early shutdown. Figure 1 illustrates a battery with low internal resistance in the form of a free-flowing tap against a battery with elevated resistance in which the tap is restricted.

Lead acid has a very low internal resistance and the battery responds well to high current bursts that last for a few seconds. Due to inherent sluggishness, however, lead acid does not perform well on a sustained high current discharge; the battery soon gets tired and needs a rest to recover. Some sluggishness is apparent in all batteries at different degrees but it is especially pronounced with lead acid. This hints that power delivery is not based on internal resistance alone but also on the responsiveness of the chemistry, as well as temperature. In this respect, nickel- and lithium-based technologies are more responsive than lead acid.

Alkaline, carbon-zinc and most primary batteries have a relatively high internal resistance, and this limits their use to low-current applications such as flashlights, remote controls, portable entertainment devices and kitchen clocks. As these batteries deplete, the resistance increases further. This explains the relative short runtime when using ordinary alkaline cells in digital cameras.

Two methods are used to read the internal resistance of a battery: Direct current (DC) by measuring the voltage drop at a given current, and alternating current (AC), which takes reactance into account. When measuring a reactive device such as a battery, the resistance values vary greatly between the DC and AC test methods, but neither reading is right or wrong. The DC reading looks at pure resistance (R) and provides true results for a DC load such as a heating element. The AC reading includes reactive components and provides impedance (Z). Impedance provides realistic results on a digital load such as a mobile phone or an inductive motor.

Figure 2 illustrates the internal resistance of an 18650 Li-ion cell when exposed to 1,000 full cycles at 40ºC (104ºF). The AC readings in the green frame do not reflect the true resistive state of a battery; DC method provides more reliable performance data with loading. 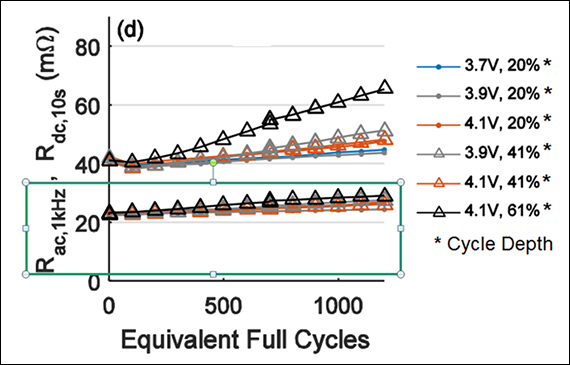 The internal resistance of a battery does not consist of the cells alone but also includes the interconnection, fuses, protection circuits and wiring. In most cases these peripherals more than double the internal resistance and can falsify rapid-test methods. Typical readings of a single cell pack for a mobile phone and a multi-cell battery for a power tool are shown below.

Internal Resistance of a Power Pack for Power Tools

Figures 3, 4 and 5 reflect the runtime of three batteries with similar Ah and capacities but different internal resistance when discharged at 1C, 2C and 3C. The graphs demonstrate the importance of maintaining low internal resistance, especially at higher discharge currents. The NiCd test battery comes in at 155mΩ, NiMH has 778mΩ and Li-ion has 320mΩ. These are typical resistive readings on aged but still functional batteries. That demonstrates the relationship of capacity, internal resistance and self-discharge.) 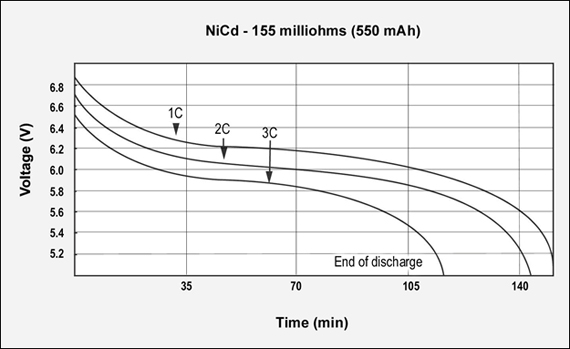 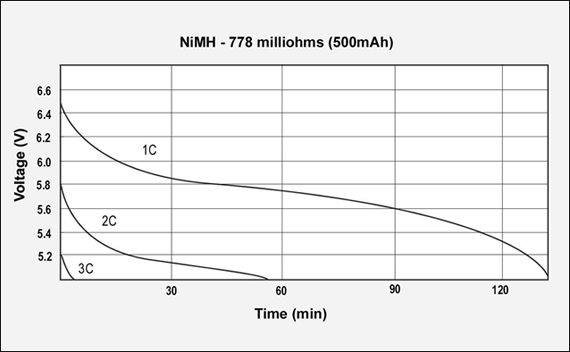 Figure 4: GSM discharge pulses at 1, 2, and 3C with resulting talk-time
The capacity of the NiMH battery is 94%, the internal resistance is 778mΩ. 7.2V pack 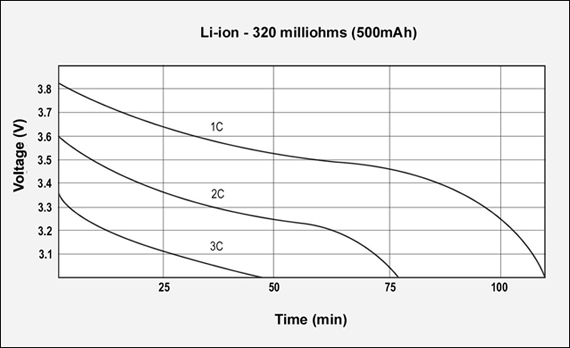 Notes: The tests were done when early mobile phones were powered by NiCd, NiMH and Li-ion. Li-ion and NiMH have since improved.

The maximum GSM draws is 2.5A, representing 3C from an 800mAh pack, or three times the rated current.

How Low can a Battery be Discharged?
Scroll to top