Explore the limitations when operating a battery at adverse temperatures and learn how to minimize the effects.

Like humans, batteries function best at room temperature. Warming a dying battery in a mobile phone or flashlight in our jeans might provide additional runtime due to improved electrochemical reaction. This is likely also the reason why manufacturers prefer to specify batteries at a toasty 27°C (80°F). Operating a battery at elevated temperatures improves performance but prolonged exposure will shorten life.

As all drivers in cold countries know, a warm battery cranks the car engine better than a cold one. Cold temperature increases the internal resistance and lowers the capacity. A battery that provides 100 percent capacity at 27°C (80°F) will typically deliver only 50 percent at –18°C (0°F). The momentary capacity-decrease differs with battery chemistry.

The dry solid polymer battery requires a temperature of 60–100°C (140–212°F) to promote ion flow and become conductive. This type of battery has found a niche market for stationary power applications in hot climates where heat serves as a catalyst rather than a disadvantage. Built-in heating elements keep the battery operational at all times. High battery cost and safety concerns have limited the application of this system. The more common lithium-polymer uses gelled electrolyte to enhance conductivity.

All batteries achieve optimum service life if used at 20°C (68°F) or slightly below. If, for example, a battery operates at 30°C (86°F) instead of a more moderate lower room temperature, the cycle life is reduced by 20 percent. At 40°C (104°F), the loss jumps to a whopping 40 percent, and if charged and discharged at 45°C (113°F), the cycle life is only half of what can be expected if used at 20°C (68°F).
The performance of all batteries drops drastically at low temperatures; however, the elevated internal resistance will cause some warming effect by efficiency loss caused by voltage drop when applying a load current. At –20°C (–4°F) most batteries are at about 50 percent performance level. Although NiCd can go down to –40°C (–40°F), the permissible discharge is only 0.2C (5-hour rate). Specialty Li-ion can operate to a temperature of –40°C but only at a reduced discharge rate; charging at this temperature is out of the question. With lead acid there is the danger of the electrolyte freezing, which can crack the enclosure. Lead acid freezes quicker with a low charge when the specific gravity is more like water than when fully charged.

Figure 1 illustrates the discharge voltage of an 18650 Li-ion under various temperatures. A 3A discharge of a 2.8Ah cell represents a C-rate of 1.07C. The reduced capacity at low temperature only applies while the cell is in that condition and will recover in room temperature. 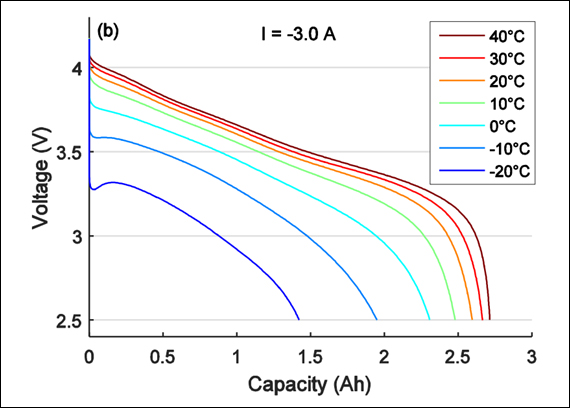 Matched cells with identical capacities play an important role when discharging at low temperature and under heavy load. Since the cells in a battery pack can never be perfectly matched, a negative voltage potential can occur across a weaker cell in a multi-cell pack if the discharge is allowed to continue beyond a safe cut-off point. Known as cell reversal, the weak cell gets stressed to the point of developing a permanent electrical short. The larger the cell-count, the greater is the likelihood of cell-reversal under load. Over-discharge at a low temperature and heavy load is a large contributor to battery failure of cordless power tools.

The driving range of an electric vehicle between charges is calculated at ambient temperature. EV drivers are being made aware that frigid temperature reduces the available mileage. This loss is not only caused by heating the cabin electrically but by the inherent slowing of the battery’s electrochemical reaction, which reduces the capacity while cold.

How to Verify Sufficient Battery Capacity
Scroll to top