The next halfway point for the auto industry is for those people who don’t need a car, but could use more than a golf cart: more speed (but not too much speed), more distance (but not a lot of mileage), more body (but that shouldn’t imply doors and windows). And, of course, no gas. 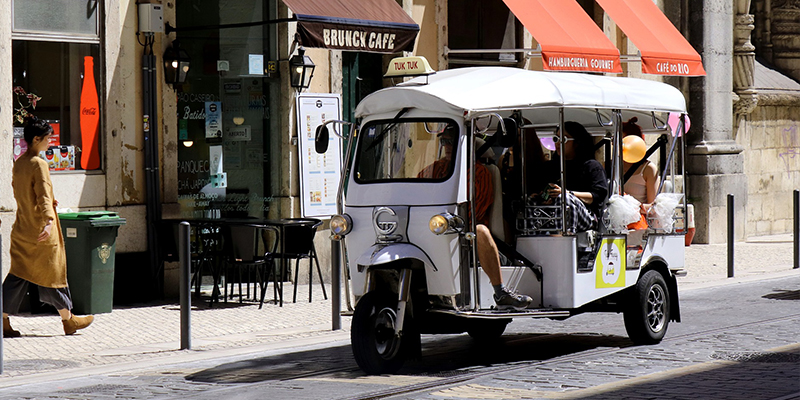 For those people, low speed vehicles answer the call.

How is a low speed vehicle different from a golf cart?

The quick way to think about a low speed vehicle (LSV) is that it’s a “street legal”, up-market golf cart. The “federally legal” way is to know that LSV’s are four-wheeled vehicles with a maximum speed of 20-25 miles per hour that weigh less than 3,000 pounds when you combine the passengers, cargo and the vehicle itself. Beyond the federal definition, state laws, insurance regulations and industry standards combine to outfit most LSV’s with car-like features including rearview mirrors, lights, a horn and a windshield.

By comparison, golf carts have a maximum speed of 20 miles per hour and are specifically designed for use on a golf course.

Golf courses are gentle, controlled and recreational environments, so golf carts do not have much in the way of structure, features or variety.

On the other hand, there’s an LSV for every purpose that doesn’t involve going over 25 miles an hour.

Some LSV’s can carry over 20 passengers, shuttling them around theme parks, campuses, airports or cities. Some will carry cargo instead of people, with a flatbed behind the cab for warehouse or factory usage. Others have tires, suspensions and protective features that can handle going off-road.

And some are simply convenient, zero emission, open air ways to get around.

Because LSV’s have a rather low maximum speed, most states only allow them on roads with a low speed limit.

For the most part, you won’t see an LSV on any road where the other vehicles are going more than 10 miles per hour faster than the LSV. Since many dense urban areas have street speed limits of 35-40 mph, low speed vehicles are an option for people in cities who don’t want to go all in for an electric car. Whether that’s a safe option, or whether you want to be known as “that guy in the overgrown golf cart,” well, your mileage may vary.

How can I get the most power out of my LSV?

One way to make sure your LSV’s mileage doesn’t vary is using a lithium-ion battery instead of a lead-acid battery.

Lithium-ion batteries put out a constant voltage regardless of how charged it is. Sounds like a regular car: your car doesn’t slow down as the needle approaches E.

But lead-acid batteries’ output drops as the charge goes down, so you get less performance as time goes on between charges.

lithium batteries for your LSV’s and golf carts

EV battery is an install-and-go LiFePO4 battery purpose-built for golf carts and LSV’s. Himax’s software makes it a “smart” battery, handling everything from efficient charging to temperature regulation to regenerative braking. This eases the transition to an LSV, whether you are considering one for recreational, commercial or everyday use.

Whether your priority is reducing your carbon footprint or your fuel bill, if you don’t need a car but aren’t willing or able to walk, bike or take public transportation, low-speed vehicles are the next middle ground that might become a fixture in the auto world.

Save Thousands On Medical Batteries Each Year